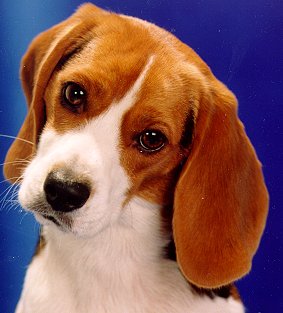 The logo for Cascade Beagle Rescue depicts a happy Beagle named Giani.  She is the reason CBR exists today and she is the reason it will continue to push forward and grow to reach out a helping hand to Beagles in need from coast to coast.

Her life has not always been happy though.  Denise Lowe, CBR’s founder, adopted this little Beagle, whose name was #CK8903, when she was 7 months old.  She wasn’t your typical Beagle puppy, full of energy, playful, amusing, coy, and mischievous.  Instead, she had been beaten.  Her mouth had been wired shut and her dew claws had been cut off with garden shears at the age of 5 months.  Denise wasn’t looking for a dog that day…at least she didn’t think so!  Beagle #CK8903 was alone and trembling at the back of a metal cage at an SPCA adoption day at a local pet supply store.  She was considered unadoptable and this was her last chance.  She would not look up to make eye contact and she wouldn’t stop trembling.  Denise asked what her story was and was told they had just gotten her in that day and didn’t know much about her.  She asked to see her so the worker opened the cage, dragged #CK8903 out and handed her to Denise.  This dog immediately started fearfully scratching and flailing around trying to get loose, but she pulled at Denise’s heart and was adopted that day.   All 4 paws were bandaged from being infected from the dew claw amputation.  Her face had open wounds from her mouth being tied shut with wire and 2 canine teeth were growing through her lips. There were open wounds on her body where she had been beaten.  Her spirit was broken then, but no more.

Her new name is “Giani Skyy”. Giani is the name of an ancient comet…what better name for this star? It was a long time before she would learn to accept love and to trust and to heal her physical and emotional wounds, but at this writing, her scars are healed and she is 8 years young. Life will never be the same for either Giani or for her owner, Denise. They embarked on a journey together…a journey of fate. There would be more Beagles in Denise’s life then she ever imagined….5 of her own, and countless Beagles to be rescued and adopted to loving homes, just as Giani had been.

Giani continues to accomplish many feats…including opening the oven door, the ability to unscrew baby gates, running all 4 bases at a little league game, interrupting a wedding by running down the aisle ‘aroooing’ at the dove-release, and the stories go on for miles. Giani is an accomplished agility and tracking Beagle, having earned 14 different AKC titles, including Canine Good Citizen. Giani is now the type of Beagle she deserves to be…a silly, comical dog, who rules the roost. Thank you, Giani, for opening the door to this adventure…..called Cascade Beagle Rescue!