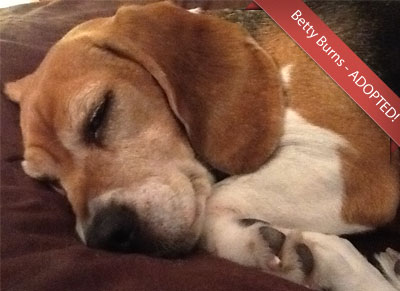 Sometimes just when we are sure we’re on one course, the path changes.  Quickly.  Dramatically.  Betty is living proof.  After two weeks of being on Cloud 9 with her new-found vision and miracle surgery, Mara and Jimmy noticed something was different.  Betty’s third eyelids were covering her eyes which was very concerning.  Mara quickly placed an emergency call to Cornell and spoke to the vet who assisted in her surgery.  She said it could be a number of things so bring her into the clinic in the morning.  The 3 hour drive on March 28 was a worrisome one.  Upon examination, Jimmy was told she had swelling so some of the meds were changed up and they were sent home.  Easy enough!

The next morning  Mara proceded with the usual routine.  Betty’s  vision was clear, her meds were given and off to work she went.  When she walked in the door after work, she noticed that Betty didn’t come runing but was sitting there tilting her head as if trying to listen…a coping technique common in blind dogs.  She dropped everything and ran to Betty, placing her on the bed to see what was going on.  She tried moving a cookie back and forth in front of her eyes.  No response.  She tried the menace response test.  Nothing.  Then Betty walked right off the edge of the bed and fell.  Through tears and sheer panic, Mara managed to reach Cornell and they said to bring her in.  We were devastated to learn that at some point both retinas had detached causing permanent blindness.  How could this be possible?  Were they sure?  Could it be a mistake?  Unfortunately, no.  It was all true.  Betty is blind.  Forever.

Mara and all of us at CBR have been in utter shock and disbelief and have shed many tears.  Tears for Betty.  Tears for Mara and Jimmy..and just tears of sorrow for the situation.   If you are reading this, you are probably holding back the tears too.

Sometimes when we think we are on the right track, we aren’t.  You see, the plan for Betty was to be flown to Portland, OR after she was fully recovered, for adoption.  Little did we know that Mara and her entire family had fallen deeply in love with Betty and every time they imagined her leaving it was as if someone punched them in the stomach.  Mara says she simply could hardly breathe thinking about it.  Although we asked her several times throughout this process if she was still OK letting her go, Mara held back her true feelings because she was trying to convince herself that Betty was to be her “foster dog”, not her adopted dog.  Bravely, she pushed forward, helping Betty through surgery, recovering, and now helping her learn to be blind again.  How could she not be attached to her by  now?

The day we found out her retinas had detached, we received a very, very long and heartfelt email from Mara.  In a nutshell, she asked if there was any way she could be “considered” to adopt Betty.  She revealed how much she loved her and always has loved her and how she just simply couldn’t let her go.  At this moment, Betty was home from Cornell but Mara was still at work.  She spent her entire lunch hour in her car sobbing.  We told her that OF COURSE she could adopt Betty, but we wanted her to discuss it with her husband and make sure it was what they wanted.  After all, they had two other special needs beagles.  It was only a few minutes later when we received another email with the following message:  I sent Jimmy a text saying I get sick to my stomach everytime I think of Betty leaving us and Jimmy answered back, “Me too.  She belongs with us.”

When Mara got home from work that night, Betty was waiting at the gate, tail wagging and wiggling.  She picked her up and held her and spinned in the yard telling her how much she loved her and that she was HOME.  FOREVER.

In the same day, we went from tears of sorrow to tears of joy.  We now realize that Betty got to actually see the only person in the world who truly loved her.  Mara was the first and last person Betty saw with her eyes.  But now she sees with her heart…as does Mara & Jimmy Burns.  A huge heartfelt congratulations to Betty for finding her forever home that was right in front of her the whole time.

Below is a short video of the first time Betty saw Mara after surgery.