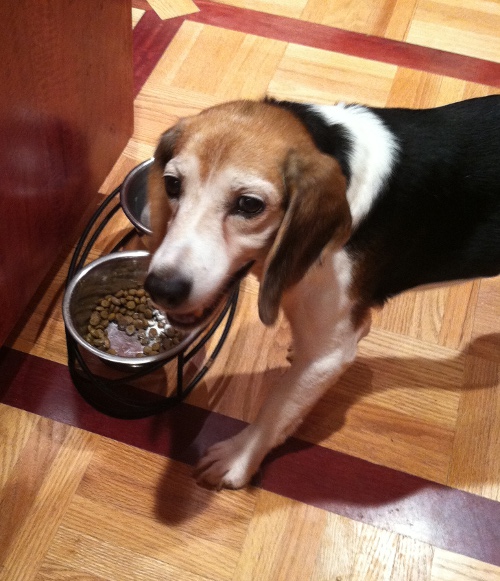 It was a long journey with many miles through several states, including a flight from Washington DC to Portland, OR but he finally made it home….forever.  River’s story is one that gripped the hearts of beagle lovers from coast to coast.  He endured 5 surgeries within a two month period.  He was originally fostered by our West Virginia contingents, Hazel and Ed, where he was loved and cared for.  It soon became evident that due to the severity of his case, we needed to get him out to Portland, OR to see a specialist.  Another 2 surgeries and he started healing physically.  He was finally able to start eating normal food and to enjoy life a little bit.

Through the months he became more and more comfortable with his Portland foster mom, Denise Sproul (me!).  River received gifts from Vicki Sommers, who is a long time supporter and owner of The Pet-Boutique.com.  Donations poured in from others in almost every state to help us cover the thousands of dollars in vet bills.  He has his own crate, his own bowl, and his own bed…and, well, anything else he wants.   We worked on house manners, potty training, and we’re still working on his case of seperation anxiety which is not the worst we’ve seen, but it’s there.  I honestly think it’s more of him having abandonment issues than anything.

Last week, two of CBR’s extraordinary fosters, Sydney & Kate, contacted us wanting to adopt River!  Wow!  I never thought the day would come.  They would be the absolute perfect home for him.  I packed his bags, his bed, some food and treats and delivered him to the waiting arms of these compassionate beagle lovers.  Odie, their other beagle, greeted him with  a welcoming tail wag.  We decided we would officially call this a short-term foster rather than an adoption to see how it went due to their work schedule keeping them away from home for long hours.  I wasn’t sure this would work for River only because of that one issue…but maybe…just maybe.  River managed to steal their hearts and soul with his adorable face and his gentle spirit…but as predicted, he was not settling in as we had hoped.  He was pacing, howling, confused about where he was.  It was hard on Syd and Kate and River and all of us.  When I picked him up, there were tears all around….I held him in my arms and told him it would be ok.  Kate and Sydney waved goodbye, brokenhearted.  I  told them they could come and visit him any time.

When I got him back to my place, all of my resident beagles aroo’d with joy and encircled him, all tails wagging.  It brought tears to my eyes…their “brother” came back and all was right with the world.  River ran around the yard checking to make sure all of his favorite spots were still there, then he did the same inside the house.  I brought his bed back in and he flopped down in it and took a long nap.

I picked him up and whispered in his ear…”Welcome home, honey.  You have been adopted.  By me.  Forever.”  I got to move him from the “Adoptable” category to the “Recently Adopted” category and am smiling!  Today we will have ice cream.